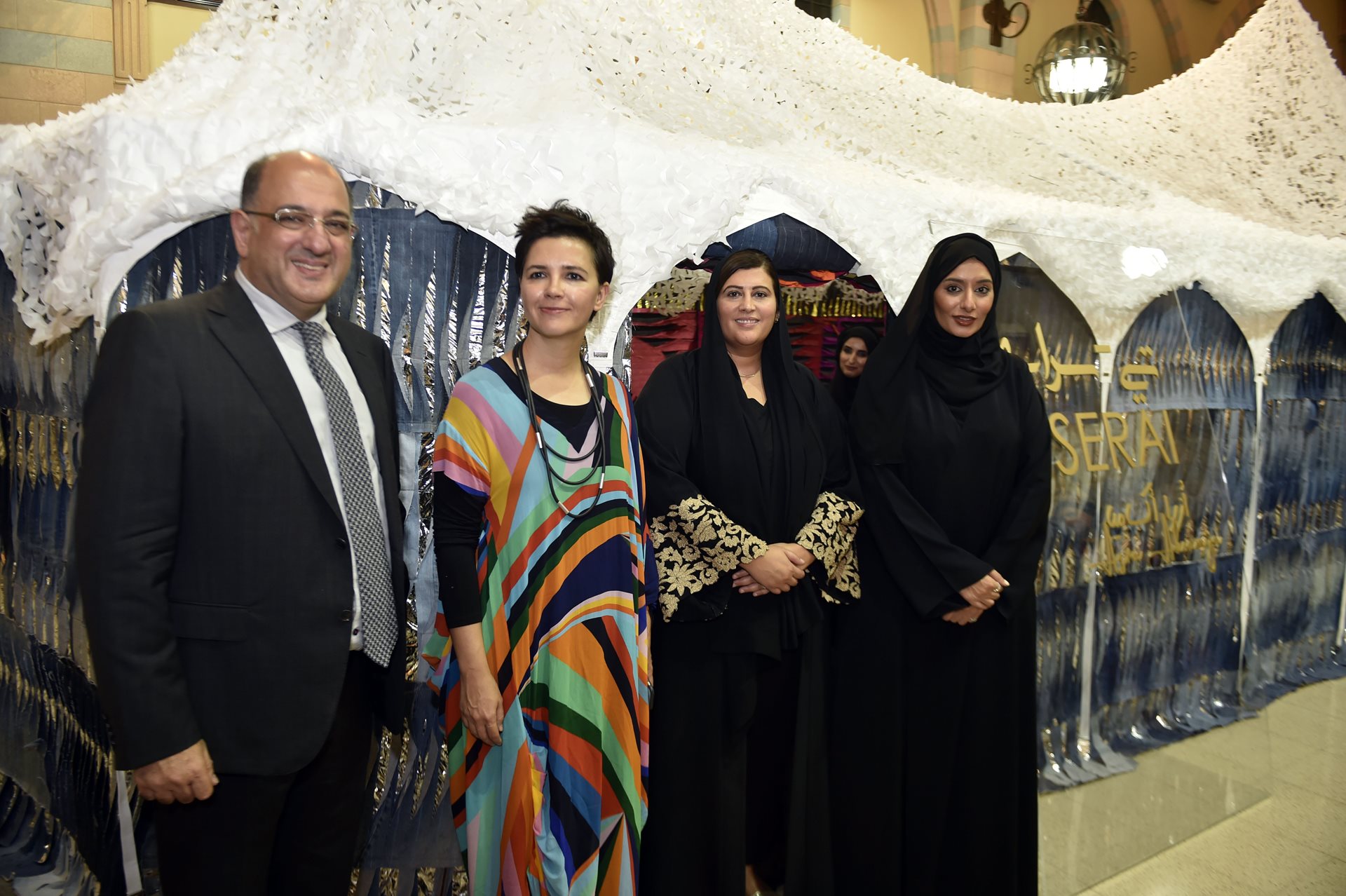 T-serai, an art installation that highlights humanitarian causes including refugees, climate change and textile over production has arrived at it’s temporary home at Sharjah Museum for Islamic Civi-lization (SMIC) from September 25 to December 7.

T-serai, an art installation that highlights humanitarian causes including refugees, climate change and textile over production has arrived at it’s temporary home at Sharjah Museum for Islamic Civi-lization (SMIC) from September 25 to December 7.

Produced from recycled fabrics with the support of SMA and various international humanitarian and cultural institutions, T-Serai was conceived by the artist and architectural historian Dr. Azra Aksamija, director of the Future Heritage Lab (FHL) and Associate Professor at the Massachusetts Institute of Technology and developed with a team from FHL involving collaborations with students and refugee learners across USA, Europe, and the MENA region.

The four-metre-high “portable palace” is aimed at addressing the cultural, educational, and emo-tional needs of refugees and also at raising awareness about the social and environmental cost of people’s consumer lifestyle.

The exhibition title alludes to the name of the standardized humanitarian T-Shelters made of cor-rugated steel. It also references histories of textile architecture of the MENA region, especially the Ottoman portable palaces and the living tradition of the khayamiya.

T-Serai also stands for the “Textile Systems for Engagement and Research in Alternative Impact,” an acronym speculating a culturally sensitive approach to humanitarian intervention involving tex-tile arts and crafts.

The tent is made of modular tapestries using recycled clothes sewn in a reverse appliqué tech-nique, which can be used by refugees to share their personal stories to preserve their cultural memory.

“SMA’s support for this impactful work that conveys a strong message, arise from our belief that cultural institutions including museums play a key role in providing resources for artists and aca-demics to conduct research that would help facilitate producing and disseminating new infor-mation and new perspectives on important global concerns,” said Manal Ataya.

"We as museums can assist artists and individuals working in this field to help communities rethink and learn about these concerns in a way that encourages discussions and most importantly en-courages action,” said Ataya.

“These inventions highlight the social, cultural, and environmental responsibility of design to ad-dress the “real needs” of people who have lost their home, history, and identity,” Azra said.

She said that refugees’ inventions can teach others how to rethink humanitarian aid to approach refugee assistance not just by providing makeshift shelters, but by creating civic spaces where cru-cial social healing, innovation, creativity and cross-cultural interactions can take place.

“As an educator and an artist, I am trying to find how I can be most impactful, to inspire people and bring them together to co-create art and deconstruct boundaries,” she said.

“Maybe this will impact the way in which humanitarian aid is planned so that to consider more cul-tural and emotional needs of displaced people by being informed through their voices.”

Parallel productions of T-serai tapestries will later take place at Al Zaatari Refugee Camp in Jordan, said Azra adding that her collaboration with SMA is due to her belief in their efforts in connecting different cultures and establishing an open human dialogue.

“Through art, history and science, museums attract different audiences allowing us to build bridges and connect diverse people across borders,” said the artist.

The exhibition is open on weekdays from 8am to 8pm, and 4pm to 8pm on Fridays.